As a global technology leader, New England Wire Technologies is honored and excited to welcome Rick Larson to our research and development team! Rick comes to NEWT with many years of experience in engineering, technology development, research, and strategic planning. We are thrilled to have Rick join the New England Wire family and look forward to his energy and enthusiasm in leading our R&D group. Exciting times are ahead!

During the spring of 1987 Rick went to work as a Chemical Technician at Markem Corporation in Keene, NH. At that time, Markem was a privately held company and very similar to New England Wire today.  During his first eight years, he worked on 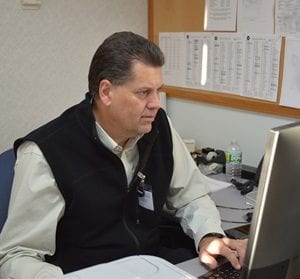 developing various printing ink technologies based on ink jet, thermal transfer, hot stamp foils, and lasers for direct printing.  Over those eight years he transitioned from being a Chemical Technician to the Senior Chemist position. In 1995, Markem afforded him the opportunity to earn his PhD, where he took a 4-year sabbatical at the University of Massachusetts Amherst Polymer Science and Engineering and completed research on how polymers interact on surfaces.

When Rick returned to full-time work at Markem in 2000, he managed the Technology and Development Chemical team.  There focus was on developing emerging chemical technologies for advancing industrial printing.  During this period, Rick’s team developed a novel technology for printing UV curable jet inks and this work catalyzed the formation of a new business unit called Aellora Digital.  From 2002-2006, Rick served two roles at Markem, one as the Chief Technology Officer of Aellora Digital and the other as the Director of Chemical R&D for Markem. This was a fantastic experience for him as he was working in a start-up environment and responsible for many of the business tasks: marketing, sales, service, R&D, communications, finance, etc.  For several years, Rick traveled the world to run trade shows and deliver presentations at conferences and symposiums.

Markem was acquired by Dover Corporation in 2006 and over the next two years Rick was active in the merging of Markem with another Dover company called Imaje.  The merger resulted in the formation of Markem-Imaje and it was another great educational experience for Rick taking a leadership role in the merger and learning how to work with new company departments in the United Kingdom, France, Sweden, Singapore, India, and China.  From 2010-2012 he was the Director of Technology Research and Development where he led a global team on the development of innovative ink jet technologies.  During this period, Rick became active in the merger and acquisition work for Markem-Imaje’s business segment within Dover Corporation. In this role, he provided technical due diligence on potential acquisition targets for Dover’s Product Identification Group.

In the summer of 2012, Rick was promoted to the Director of Engineering for North America and then in the spring of 2013 he became the Global Director of Engineering.  His responsibilities were focused on the development and engineering support of all Markem-Imaje products.  His teams around the world included Chemistry, Mechanical Engineering, Electrical Engineering, Fluid Mechanics, Physics, Software Engineering, Product Reliability and Regulatory Compliance, and outside contracted partnerships.  This position had him traveling throughout Europe for 65% of his time, with offices in Geneva, Switzerland and Keene, NH.  Rick’s responsibilities also included intellectual property (he has ~40 global patents), strategic planning, annual operating planning, budgeting, he managed 22 direct reports, and other senior leadership activities.

During the fall of 2015, Rick decided the challenges of running around the world were too much and it was not a good fit for his family to move to Geneva, Switzerland. Rick and his family have relocated to Littleton, NH and they are excited to be up in the north country. As Rick stated, “It is with great excitement that I now have the opportunity to work at New England Wire Technologies and hopefully bring my years of experience to help us grow by delivering on future business strategic objectives. I thank everyone for the great welcome to the wonderful New England Wire family atmosphere, where we openly work with each other to drive excellence at New England. There is much to be accomplished and I look forward to working with the team.”

Explore What NEWT Can Do For You