In 1985, for the first time, a robot was used to assist in a surgical procedure on a human. A trail-blazing, adventurous team had modified an industrial robot that guided a needle in a brain biopsy procedure. Since then the rate of new technological advancements has done nothing but accelerate. That fast pace is reflected in what has made robot assisted surgery a hot new trend that promises to revolutionize medicine in coming years. 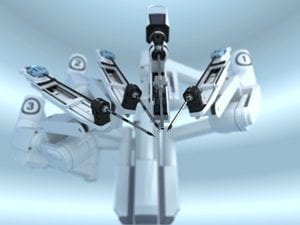 That ground-breaking 1980s effort eventually led to development of the Neuromate surgical robot. It received FDA approval in 1999 for use in brain surgery. It was primarily used for stereotactic surgery where prior CT or MRI imaging is used to locate a tumor and a minimally damaging path through the brain to reach the tumor. Manipulation of the surgical tools remained under control of the surgeon.

In 1992 another surgical robot, Robodoc, was introduced in Europe. It has participated in more than 5,000 hip replacement surgeries, providing help in coring out the femoral shaft to accommodate the necessary prosthesis.

In succeeding years robotics found use in telesurgery—where the doctor performs surgery on a patient even though they are not in the same physical location—and especially in laparoscopic surgery.  Also known as minimally invasive surgery, laparoscopic surgery uses a video camera and several thin surgical instruments. Small incisions usually one-half inch or less are made, then plastic tubes are placed through the incisions to reach the area of interest. The camera and instruments are passed through the tubes, called “ports,” giving the surgeon access to the inside of the patient.

The ever accelerating growth in surgical robotics is guided by a number of factors.

— Micro-motors that drive the surgical tools grow smaller, more powerful and offer surgeons up to ten degrees of freedom even while operating in tight spaces.

— Haptic feedback gives surgeons a tactile sensation to better control the robotic system, and has led to increased acceptance of robotic surgery.

— Patients and surgeons across the board have become more comfortable with the concept of robotic-assisted surgery.

Along with these advances robots become capable of new functionality, and the definition of “robot” has continued to evolve. Keith Dinwiddie in his book Basic Robotics offers this definition, which seems to summarize today’s technology nicely:

“A machine equipped with various data-gathering devices, processing equipment, and tools for operation flexibility and interaction with the systems environment, which is capable of carrying out complex actions under either programmed control or direct manual control.”

However, while advanced imaging systems, their ability to use CT and MRI data, and the sheer electro-mechanical elegance of design may be the most visible part of a medical robot’s design, the small and hidden internal components are what give the surgeon the dexterity they need to perform complex surgeries. For instance, in early medical robot design surgeons had no haptic feedback. Doctors couldn’t tell how much force they used in suturing a wound or how much pressure they placed on an organ with a surgical tool.

Solving the haptic feedback problem required a great deal of design work using linear DC servo motors and micro-motors to control movement of the surgical tools. Such motors, from companies like MicroMo and Faulhaber, are extremely small yet can deliver substantial force. For example, brushless DC servo-motors come in diameters of only 16 mm and produce 2.6 nMm (Newton-millimeters) continuous torque.  Others include integrated magnetic encoders and gear reducers. They run on 24 volts and have a free speed of 9000 RPM and stall torque of 12 nMm. These motors give the surgical tools motion when the surgeon manipulates the hand controls.

Similarly, electrical cabling that delivers power and signals to the many components of a surgical robotic system is a key component. Coaxial cable and twisted pair cabling carry video and both digital and analog data between the active components of the robot and its control circuitry. These cabling systems are used to connect motors, sensors and other components. They are highly specialized and must meet rigorous specifications regarding impedance, signal attenuation and skew— the difference in propagation delay between the fastest and slowest set of wires in a twisted pair.

Two resources that discuss the evolution of medical robotics and the trends in today’s 21st century marketplace are available online and may be of interest to those who’d like to learn more.

“How the Future of Surgery is Changing: Robotics, telesurgery, surgical simulators and other advanced technologies” by Richard M. Satava, MD with Washington Medical Center reviews the state of the art in medical robotics.