Like an avalanche that changes the landscape forever, the technology of our 21st century is altering virtually every aspect of living. The iPhone, famously introduced in 2007, changed not only how people communicate. It spawned new social behaviors that were multiplied by Google’s Android O/S and the horde of manufacturers who built smartphones to compete with the iPhone family. Today, people routinely take selfies to capture everything from a special moment to a restaurant meal. Our phones give us instant connection to the Internet, to social media, to email and GPS. Using apps, we can connect to millions of public or private entities.

Now, some are speculating that solar car technology may someday create another even larger avalanche of change. It could eliminate most human contributions to climate change while demolishing the trillion dollar worldwide petroleum business forever.

Solar powered cars use photovoltaic (PV) panels to convert sunlight to electricity, which then powers one or more motors. The photovoltaic effect was discovered in 1876 when William Adams and Richard Day exposed a selenium coated surface to sunlight. The PV effect in selenium doesn’t produce enough current to use as a power source, but its electrical resistance varies significantly when exposed to light. This characteristic has made selenium a good choice for “electric eye” light beam sensors, photographic light meters and similar devices.

It wasn’t until 1953 that scientists at Bell Labs discovered that silicon’s PV effect produced enough current flow to actually run electrical devices. Just two years later, William Cobb demonstrated the first automobile powered by sunlight at General Motors’ 1955 auto show held in Chicago. The vehicle was powered by 12 selenium photocells that drove a tiny motor. Tiny, because the vehicle was a model—only 15-inches long and made of balsa wood.

By 1962 the International Rectifier Company demonstrated the first solar car a person could actually drive, using more than 10,000 solar cells mounted above the rooftop.

Since then, PV cells have undergone waves of development and improvements that have increased their efficiency, making them the go-to power source for satellites, Coast Guard lighthouses, railroad crossing gates, highway warning and notification signs and—to the citizens living in outlying areas of Tahiti, the power that keeps their lights, radios and TVs on at night. In fact, solar power is the most common solution in off-the-grid rural areas in nations all around the world.

As PV cell efficiencies have improved, their costs have also declined. Yet even today, those efficiencies are nowhere near enough to provide the peak demand for an automobile: 40 kW for a small car; about 80 kW for a 3,500-pound large car.

Solar power delivers lots of energy; it’s renewable; it produces no carbon footprint; and, it’s never-ending (for at least the next 5 billion years). In fact, the sun delivers more energy across the face of Earth in one afternoon than the entire world uses in a year. Unfortunately, only a portion of it can be harnessed. The sun beams 174 Petawatts of energy upon the Earth. That’s 1.74 x 1017 watts.  A portion of that, around 30 percent, is reflected back into space. The atmosphere absorbs another 19 percent. This reflection and absorption of sunlight before it reaches the Earth’s surface reduces the average flux energy at the surface of Earth to about 340 W/m2.

However, oceans cover 70.8 percent of the planet and the frigid zones at each pole account for 3.45 percent of Earth’s surface area. Considering that it’s difficult to operate solar PV panels in either of these areas, the U.S. Department of Energy, advises that the solar energy reasonably available across land masses would produce approximately 7,500 TW.

In practice, numerous solar energy collection points would be established all over the world to capture this energy and deliver it to nearby consumers via the existing grid. However, with advances in battery storage, micro-grids are already appearing around the world that deliver solar power to limited, local areas, some as small as a college campus. But while the grid is still the primary distribution method, utility companies are building their own solar farms. For instance, in 2016 Florida Power and Light built three “universal solar power plants” in the Sunshine State, each capable of producing 74.5 MW—enough to power 15,000 homes. With new construction underway the utility plans another eight solar plants with capacity of 600 MW to power 120,000 homes.

A typical solar farm installation uses about 330,000 solar panels to produce some 74 MW. Clearly, solar-powered cars don’t have the option of installing thousands of panels to produce the required 40 to 80 kW a vehicle needs at peak demand.

Yet, with the ever-advancing breakthroughs in almost every technological field, one might imagine that solar cells will eventually become more efficient. The state of the art solar panels today top out at somewhere between 15 to 20 percent efficiency in converting sunlight to electricity. What if that could be doubled or tripled over the next few decades?

According to NASA, the average total solar irradiance over the entire planet delivers about 340 W/m2.  Assuming 100 percent conversion efficiency, which is impossible to achieve, it would take more than 100 solar panels to produce the 40 KW peak power required by even a small car such as a Mazda MX5 Miata at 2,332 pounds (without driver, passenger or cargo). Sadly, relying on technology to bring efficiency improvements cannot solve the problem. Even hoping for some radical, new, exotic, science-fiction-like solar panel material cannot change the amount of power available at the surface of Earth. Despite the massive energy levels reaching our outer atmosphere, the per-square-meter energy level on Earth’s surface just isn’t enough to power a car.

So Where Do We Go (Racing) from Here?

The fact is, almost every solar-powered car ever made was designed to take part in a solar car race. The World Solar Race attracts university students to Australia every 2 years including those from Stanford, MIT, the University of Michigan, University of Tehran, and even some high school teams.

In the most recent race (October 2017) the University of Michigan vehicle, named Novum, sported a racing team of 70 student engineers and technologists representing more than 15 major fields of study. These young men and women believe in solar power and want to stretch their creative talents to build the most aerodynamic and efficient vehicle possible. Since the first World Solar Race in 1990, the UofM Solar Car Team has designed, built and raced America’s best solar vehicles. With 6 consecutive National Championships, 9 overall, 5 Top-3 World finishes, and 1 International Championship, these future tech leaders claim to be America’s number one team. We agree. 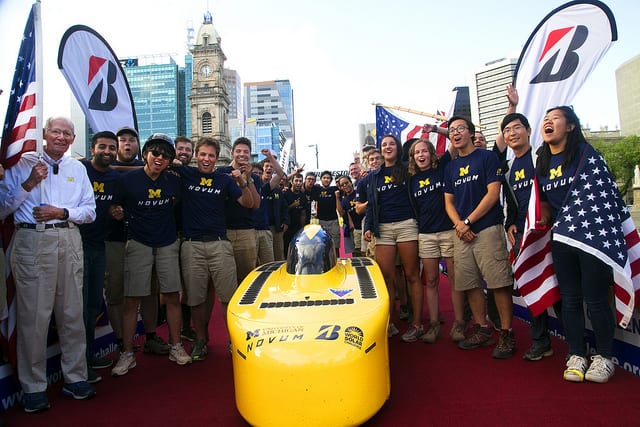 As an official sponsor, NEWT has been proud to support the UofM team for several years. We have donated highly flexible wire and cables used to connect the solar array to the charge controller, and the battery assembly to the motor controller. These are routed through tight paths and channels dictated by the design of their highly streamlined vehicle. NEWT’s products are the ideal answer for such specialized and demanding applications.

The Michigan team has used other NEWT product donations in the small caravan of support vehicles that scout out obstacles and problems in the road ahead; that provide weather and environmental information to the solar car driver; and, may even carry replacement drivers as well as camping gear for the team to bed down in the outback once the sun goes down.

If you thought this was an easy, almost casual “low speed race,” the racing team will tell you it’s much more. Driving across the outback in the World Solar Race is much like driving from New York City to Casper, Wyoming and sleeping in a tent each night. It’s certainly nothing like the Daytona or Indy 500. In 2017 the UofM team drove 3020.59 km (more than 1,876 miles) from Darwin to Adelaide, Australia over seven days, achieving an average speed of 71 km/h (41 mph) in its Novum solar car.

New England Wire believes in the importance of encouraging and supporting tomorrow’s scientists and engineers and happily works with numerous universities and lab facilities to partner with those advancing the innovations of the future.

If you have a challenging project that requires special wire, cable, Litz wire or any of the many specialized products we custom manufacture, please give us a call. We look forward to working with you.