If you’re among the millions who watched Jodie Foster in the dramatic 1997 sci-fi movie, Contact, you’ll recall how a consortium of nations came together to build a machine that allowed her to travel to another world more than 26 light-years away. That astonishing achievement, the stuff that makes great sci-fi, was no greater than what’s happening in the real world, in the South of France, today. Thirty-five nations have come together to build a miniature sun. It’s named ITER, which means “The Way” in Latin, and refers to the International Thermonuclear Experimental Reactor.

Almost three years ago we told you what ITER is. Much has happened since then, so this article will bring you up to date for 2019.

For decades, scientists around the world have studied the feasibility of generating energy from nuclear fusion — the process that powers our sun and other stars. The sun’s massive gravity compresses hydrogen atoms so intensely that they fuse into helium and give off massive amounts of energy in the process. The ITER machine cannot replicate the sun’s massive gravitation, so it uses heat — 150 million degrees Centigrade, ten times hotter than the interior of our sun — to create fusion.

No physical material can withstand such intense heat, so magnetic fields are used to contain the blazing hot plasma. Eighteen electromagnets — giant coils of wire — each weighing many metric tons, carry currents in the range of 15 million Amperes to create the gargantuan magnetic fields needed to contain what is essentially a miniature, blazing star. These coils are cooled by the cryostat component of ITER to just a few degrees above absolute zero, which allows the coils to operate as superconductors that pose virtually no electrical resistance to the current flowing through them.

The energy used to heat hydrogen into a plasma comes from the French electrical grid, which will deliver some 50 MW into ITER. Once hydrogen transforms into a plasma and fusion begins, ITER is expected to deliver 500 MW of energy. In the future, the technology developed at ITER will be used to spin steam turbines to generate electricity. ITER is not being built to power homes and businesses. It is a proof-of-concept project intended to advance the science of nuclear fusion power.

With a project so colossal and complex, the ITER team mapped out its overall build and development plan beginning as far back as 1986 with the goal of “first plasma” in 2025. Here’s a snapshot of what’s happened since we last shared information about ITER.

September 2016. Workers began the welding operation on the ITER cryostat, the 95 x 95 foot (29 x 29 meter) stainless steel enclosure that surrounds the vacuum vessel and superconducting magnets. The cryostat ensures a ultra-cold, vacuum environment that allow the electromagnets to work as superconductors. The welding of the cryostat base (one of four main segments) was expected to require more than one year. 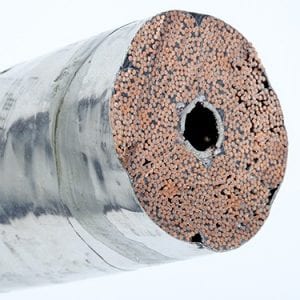 December 2016. In 2013, NEWT acquired and then re-engineered a cabling machine that could handle the massive weight of the electromagnet spools and conductors. While typical spools are 12 inches in diameter, the ITER spec called for 40-inch diameter coils.

Then, by December 2016, China, Europe, Japan, Korea, Russia and New England Wire Technologies in the U.S. contributed to the manufacture of 54 miles (88 km) of niobium-tin superconductor and conventional copper wire that was wound into ITER’s toroidal field coils — 500 metric tons in all. According to Eisuke Tada, ITER Deputy Director-General, speaking of these coils: “A component that is 16 meters in height and weighing 190 tonnes has been successfully pre-assembled to within sub-millimeter tolerances by multiple manufacturers. The international nature of this achievement makes it all the more remarkable.”

November 2017. The ITER Organization reached the half-way point in construction of the several buildings and facilities required to reach “first plasma” by 2025. The scope of construction work includes design, component manufacturing, building construction, shipping and delivery, and assembly and installation of the many components. The 50 percent mark was passed in November 2017.

March 2018. To heat hydrogen atoms to 150 million degrees Centigrade, ITER uses three energy sources. One of these, the neutral beam injection system, fires a stream of ions into the vacuum chamber. Those ions collide with hydrogen atoms and impart their energy to them, which is manifested as heat. In March 2018, testing on this critical system began in Padua, Italy.

June 2018. The tokamak is a vessel whose walls are heated by the plasma contained in the magnetic field. That heat can then be used to produce steam that powers turbines and generates electricity. For the first time, access to the pit that will eventually house the tokamak became available for installation activities.

August 2018. European contractors finished pouring the concrete crown — a solid base ring and 18 radial walls that will support 23,000 metric tons of machine from below.

November 2018. The electromagnets, which need to operate at temperatures near absolute zero, must be protected from exposure to the outside atmosphere. An elbow-shaped segment of a magnet feeder container measuring about 3-feet (one meter) in diameter became the first machine component installed in the basement of the Tokamak Building.

March 2019. When you’re working with components that weigh tens or hundreds of tons, positioning them accurately and within sub-millimeter tolerances requires special tools. The SSAT #1 (Sector Sub-Assembly Tool #1) is itself a device weighing several tons. It will allow operators to position critical ITER components. In March, load testing is scheduled to begin with dummy loads. Operators will attempt to verify the tool’s ability to accurately adjust the dummy load toroidally and to six degrees of freedom within tolerances of +/- 1 millimeter.

June 2019. The first toroidal field coil weighing 310 tonnes and measuring 30 x 55 feet (9 x 17 meters) should be delivered by mid-year. This is one of 19 such coils; 18 are required by ITER, with one being a spare. They are manufactured in Italy and Japan, then shipped to France. The manufacturing and logistics involved are unique to the ITER project.

These toroidal field coils are the “magic” that confine 150-million-degree plasma. Because plasma is filled with charged particles, they respond to magnetic fields. The electromagnet field coils shape and control those particles to prevent them from melting the walls of the tokamak.

ITER’s electromagnets use wire made from an alloy of Niobium and Tin, which are enclosed in super-cooled conduits. Each electromagnet offers a stored magnetic energy of 41 GJ and a peak field of 11.8 T. All 18 together, along with their superstructure, weigh more than 6,000 metric tons.

Here’s an interesting video that further expands on how the toroidal coils are manufactured.

Q4 2019. The central solenoid requires five electromagnets. The first — a 110 metric ton unit — will be completed, tested, packaged and ready to ship from the United States during the fourth quarter of 2019.

Q4 2020. Liquid helium maintained at -269 degrees Centigrade and the components that deliver and contain it will receive operational acceptance testing. This critical step will qualify ITER for further development.

Q4 2021. The 18 colossal electromagnets should be fully tested and accepted, moving ITER ever closer to “first plasma.”

Q2 2022. The vacuum vessel, a 5,000-metric ton, torus-shaped enclosure will be assembled using overhead cranes. By Q2 of 2022, all the sectors should be in place, supported by temporary stands while welding is underway.

Q4 2023. ITER’s nearly 60 foot (18-meter) tall central solenoid is the last major component to be installed before the cryostat is closed permanently. Installation activities on the solenoid will begin in late 2023.

Q4 2024. The closure of the cryostat in late 2024 marks the end of ITER’s machine core assembly phase. It also marks the beginning of the steps required to commission ITER for operation. Following the cryostat’s closure, the next step will be to evacuate the vacuum vessel and cryostat enclosures for a first round of leak testing at room temperature. As Aristotle said, “Nature abhors a vacuum.” Technicians will search for even microscopic leaks into the cryostat or vacuum vessel that could compromise ITER’s operation.

Q4 2025. Unless the PERT charts and project road maps slip, December 2025 is slated to signal the first production of plasma. As the ITER milestone map says, “This important milestone will mark the end of the construction and the transition to operation.”

“The very first low-power hydrogen plasma—lasting only a few milliseconds—will be followed by other ‘shots’ of increasing power and duration. This shakedown mode, lasting a few weeks, will be followed by a shutdown phase during which the systems that are indispensable for hydrogen and helium plasmas at nominal power are installed. The first production of fusion power will take place during the machine’s nuclear phase, scheduled for the middle of the following decade [the 2030’s].”

The ITER project began with the first meeting between Ronald Reagan and Mikhail Gorbachev in October 1986, who both agreed that an international project to develop fusion energy was in the interest of humanity. The nearly 40 years since that meeting have seen steady progress on the experiment known as ITER.

Developing such phenomenal new technologies that require massive R&D investments, unparalleled breakthroughs in manufacturing capabilities, and construction capacities beyond any previous endeavor — all of these make ITER a model for international cooperation worthy of admiration. Perhaps, in another 40 years, we may find “stars” shining from every continent, delivering power to support the Earth’s (by then) 8 billion people, no matter where they might live.

And for Fun, Some Fictional Fusion!

Hollywood has paid an indirect tribute to how fusion power has the potential to transform our world by using the technology to spice up movie scripts.

While ITER is a very real new technology for power generation, we think you’ll enjoy this fun and really creative article about iconic fictional power sources from our friends at Save On Energy.  Enjoy  🙂